Find out more for yourself — Click the underlined links to read the source documents.

The UFCW Constitution allows the union to discipline members for speaking out against the union, or trying to remove it. Members put on trial by the union do not have the right to a lawyer.

Instacart prioritizes your flexibility. The UFCW prioritizes rules and control over its members, as these sections from the UFCW’s Constitution demonstrate.

For many years, the UFCW sought to keep its Constitution secret from the general public. The union even went to court to try and keep it secret:

“The UFCW International had joined with UFCW Canada and Local 777 (now re-organized as Local 247) in an earlier lawsuit charging a UFCW shipping clerk with defamation and with copyright infringement for posting the union’s constitution on his web site.”

Today, the Constitution can be viewed through the Labor Department’s Office of Labor Management Standards portal. The UFCW International Constitution is 29 pages with 39 separate articles that set numerous rules and regulations for members to follow. If you value flexibility and control over your own life, the UFCW may not be for you.

Under Article 25(A), members may be disciplined for:

“1. Violating any provisions of the Constitution or laws of the International Union or the approved bylaws or established rules of the member’s Local Union”;

This rule is written so broadly that it covers just about anything the union says. Any rules created by the union simply restrict you and your freedoms.

If you are unhappy with the union and try to get rid of them, you can be disciplined.

If you speak out against a union boss or officer, you can be disciplined.

“4. Deliberately engaging in conduct in violation of the responsibility of members toward the Union as an institution.”

Again, another “catch-all” to say if you do anything the union doesn’t like, you can be disciplined.

Union officials have even threatened members with discipline for violation of membership oaths.

Almost three full pages of the Constitution set out the procedures for internal UFCW trials of members. Art. 26(A)(2) states any union member can file a charge accusing any other union member. Trials are held by the UFCW and the charged member does not have a right to a lawyer. Rather, an “accused member may be assisted, advised, or represented by another member of the Local Union” under Art. 26(A)(12). If found guilty, members can be disciplined, fined and expelled from the union. UFCW can go to court to collect such fines from members.

UFCW Local 81 included a provision in its bylaws that prohibited any member from resigning union membership during a strike against an employer. After the union announced a strike against the employer, several employees resigned membership and crossed the picket line to continue work. The union directed them to appear before the Executive Board, threatened fines, and then directed them to appear before a Trial Committee — with no attorney present.

The employees were subsequently suspended and/or fined for crossing a picket line, and for failure to pay dues. An Administrative Law Judge subsequently ruled that the UFCW had illegally restrained and coerced these employees from rights guaranteed under the National Labor Relations Act. The NLRB subsequently upheld this decision and ordered the union to change its bylaws and to rescind fines. Read more.

Here are some additional highlights from the Constitution:

Read the Constitution and get all the facts for yourself – and your family. If the UFCW Constitution does not have enough rules, the local unions have their own rules in their bylaws.  You may want to read these bylaws, too. 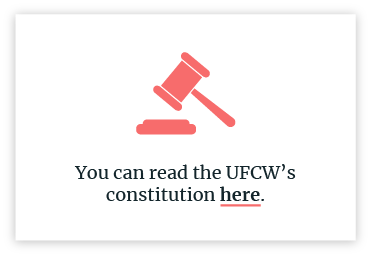 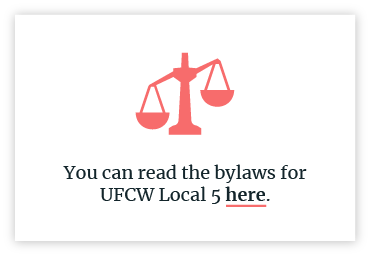 Shopper’s Question: If I follow all the rules, do I get a say in how the union spends my money?

Instacart’s Answer: You don’t. However, union members do have some recourse if they think their union is breaking the rules or mistreating members. Read on to see how UFCW members have tried to hold their union accountable.